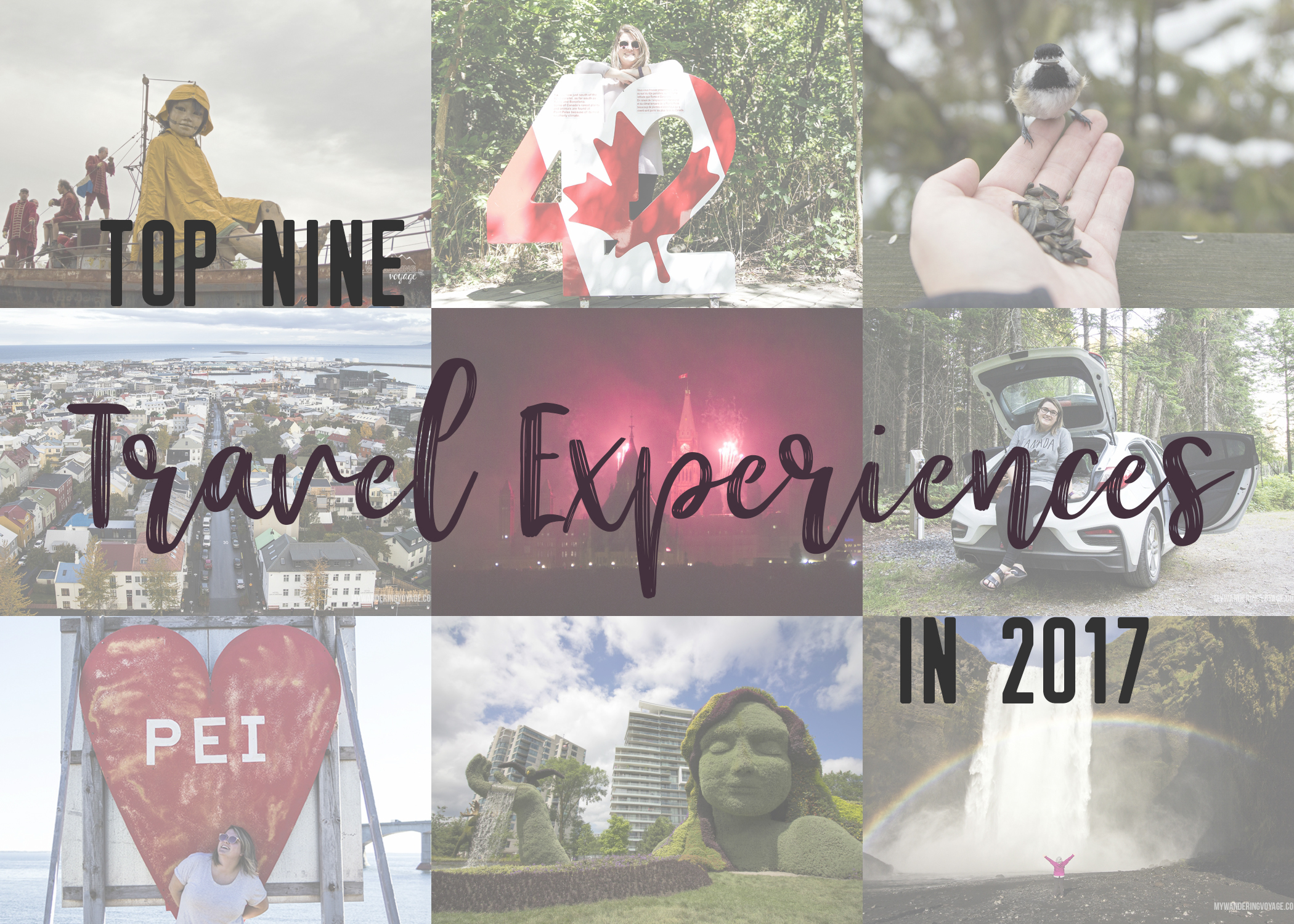 2017 had a lot of ups and downs, but as we close the year off in hopes of a better one next year, it’s time to reflect on the experiences that made us happy. Here are my top nine travel experiences I had in 2017.

9. Holding a chickadee in my hand and winter camping 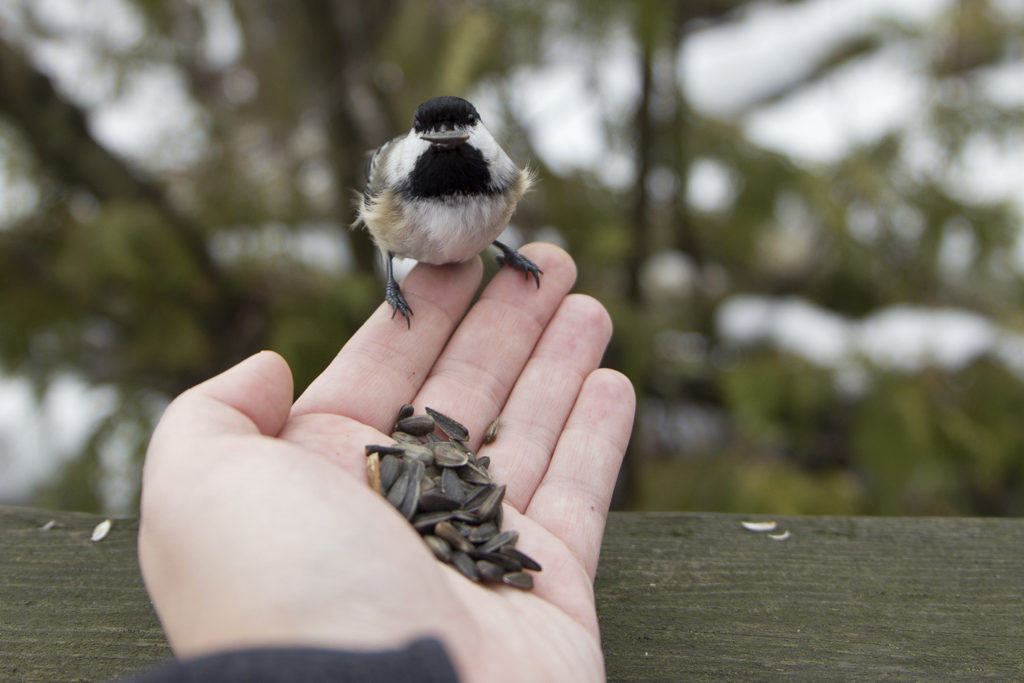 Starting the year off right, friends and I went to the shores of Lake Huron for a little winter adventure. We stayed in a yurt at MacGregor Point Provincial Park. While the snow had almost completely melted into a giant ice box, it was still cold and beautiful. We joined in on a group that was going to track some animals. The park staff pointed out differences between footprints all ending in a wooded area near a pond. Here the chickadees were filling the winter silence with their adorable chirps. Some were brave enough to sit on our hands. In 2018, we are again heading out for another winter yurt camping adventure, this time with more snow!

8. Visiting my 5th National park this year (and 12th in total) 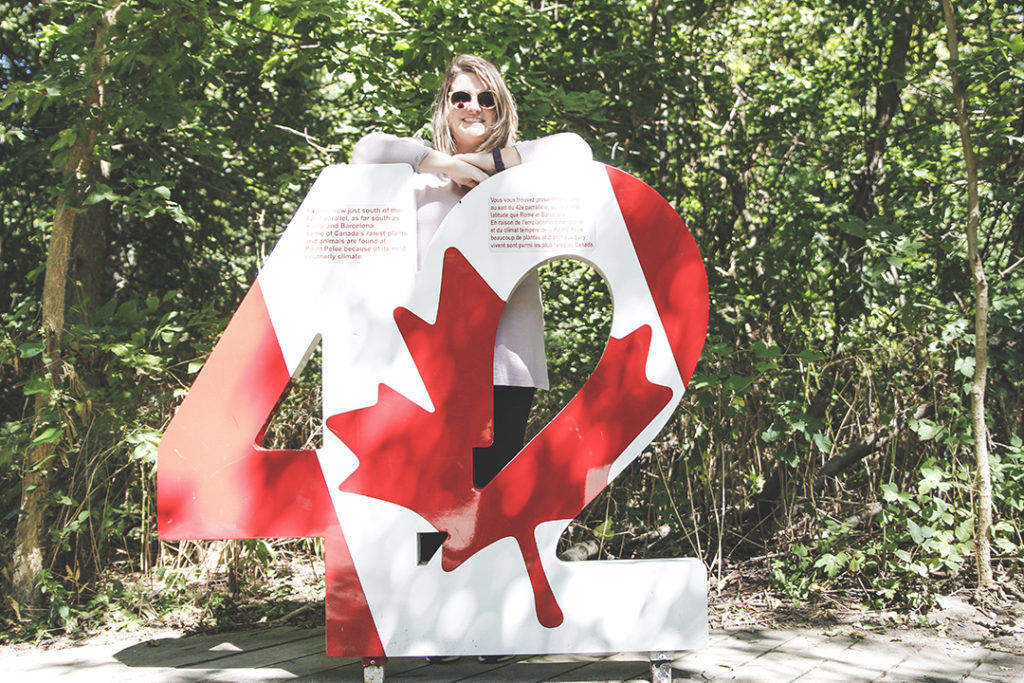 This year, Canada’s 150th year since confederation, all entry into our National Parks were free. This meant I wanted to see as many as possible. In September, friends and I took an impromptu camping weekend getaway to Canada’s most southern point – Point Pelee National Park. This was my fifth national park this year and my 12th in my lifetime. In 2018, I have a goal of visiting at least one National Park per year – Where should I go in 2018??

7. Montreal and seeing the giants 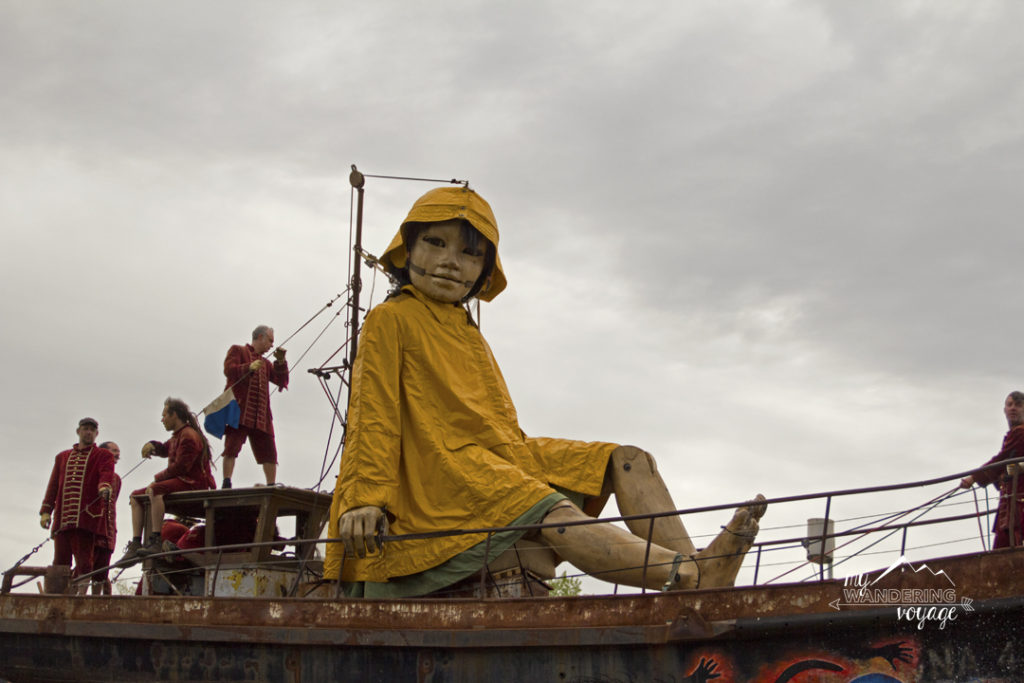 While Canada was celebrating 150 years, Montreal was also celebrating its 375th year since incorporation. Friends and I took the opportunity of a long weekend to head up that way and explore. We had a terrible hostel experience the first night, but we were able to sort it out and enjoy the rest of the weekend in peace! One of the city’s birthday events included these giant marionettes – an art installation from Royal de Luxe. It was a magical experience, one I’m not likely to forget! 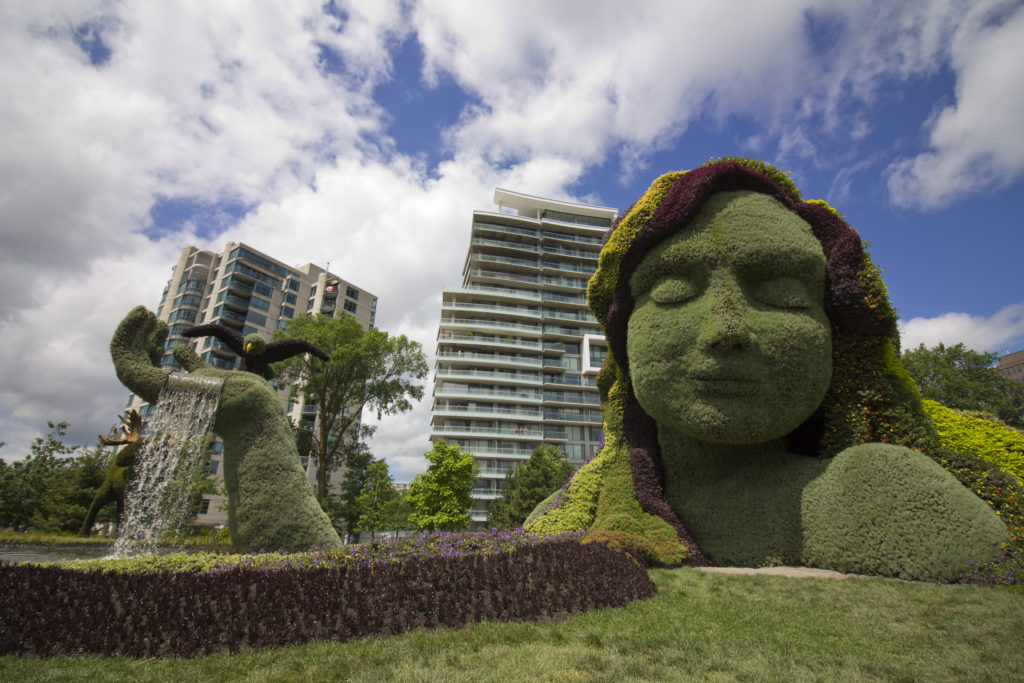 In keeping with a very Canadian theme this year, I channelled my inner botanist at the stunning Mosaïcanada150, a living sculpture garden at Jacques-Cartier Park in Gatineau. There were dozens of incredible sculptures, 13 of which represented each province and territory. This one reminds me of Te Fiti in Disney’s Moana. 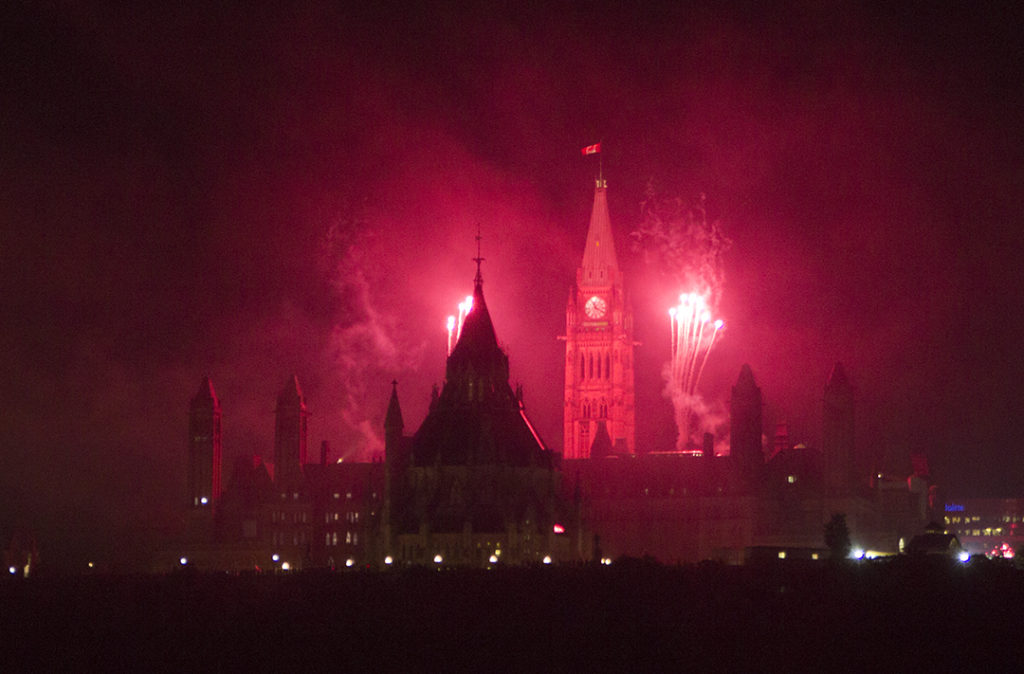 Celebrating Canada Day in the capital was one of my bucket list items. I thought, someday I will do this. Well, knowing that Canada 150 would be absolutely insane in the membrane, I said heck yes, let’s go! This trip meant a lot to me because it meant reconnecting with family I hadn’t seen for a long time. It also was so inspiring to see such a show of Canadian pride. Our country isn’t perfect, but I’m sure glad to live here. Yes, the crowds were terrible, but an open mind and a flexible schedule meant the weekend was an absolute blast!

4. Road tripping out east and staying in my car 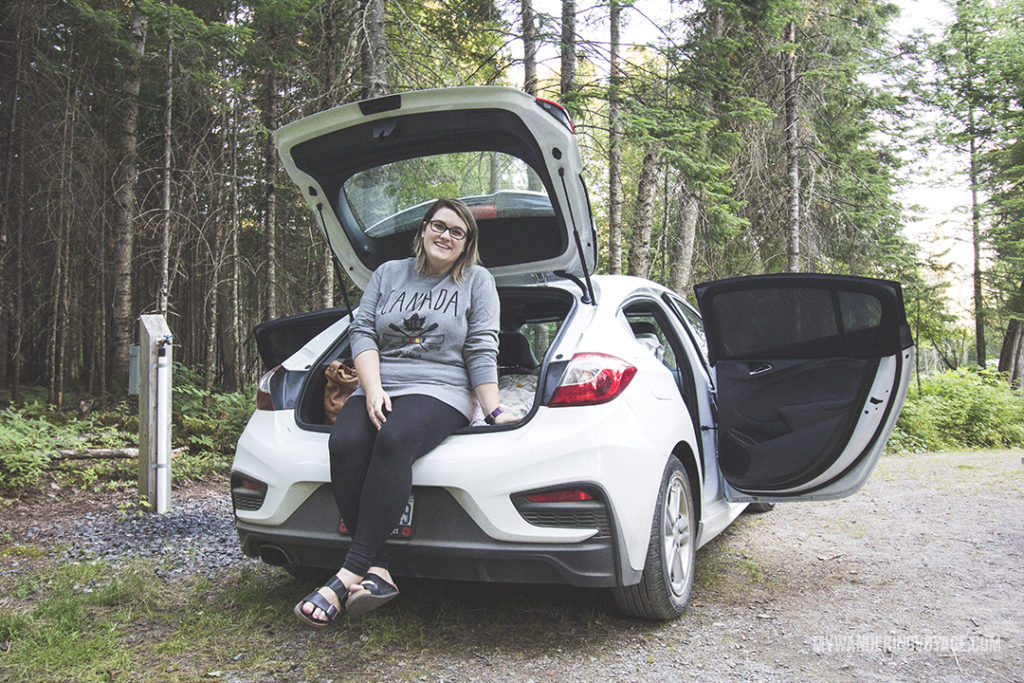 The looks I received when I told people my plan to sleep in my car for a road trip out east were priceless. I assured them that I was basically glamping at parks across Canada, so don’t worry. And let me tell you, it was AWESOME. Waking up to beautiful views every morning, sleeping on a comfortable memory foam bed inside the car and enjoying the camp life was stellar. It was a little difficult setting everything up just right at first, but by the third night, I was good to go and slept like a baby. The best part was waking up to ocean views right on the north coast of Prince Edward Island.

3. Exploring Reykjavik and everything this charming city has to offer 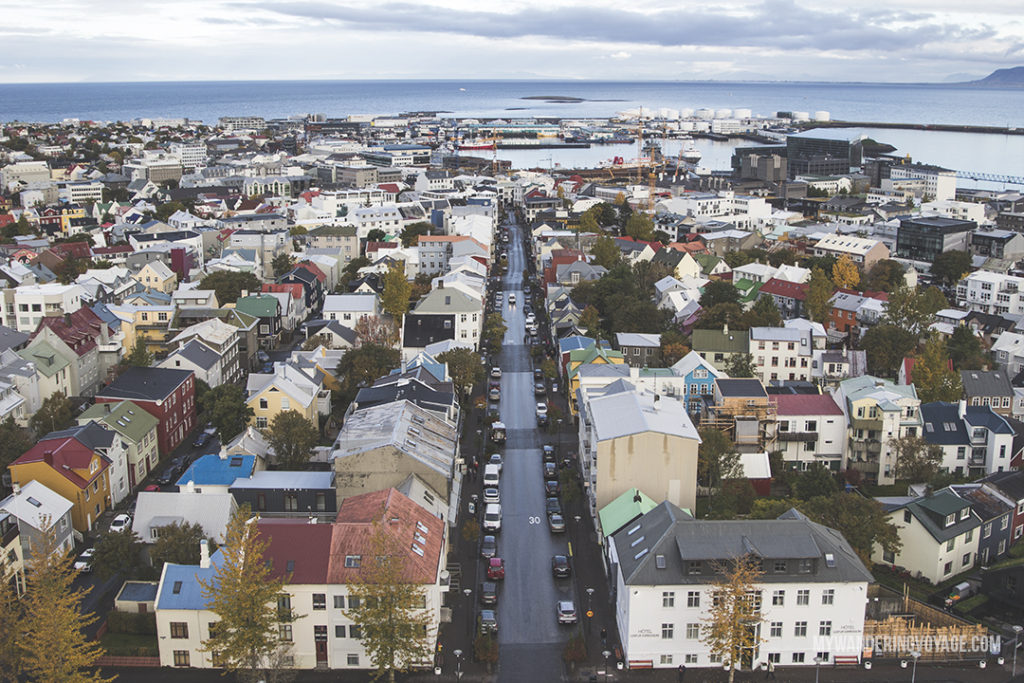 If there is any place that someone should go, no matter what age they are, it’s Iceland. We spent our first few days in Reykjavik, the capital city. All three of us fell in love. The colours, the food, the people, the sights. Everything and anything we saw and did here was perfect. Some of the best views of the city can be found atop the Hallgrímskirkja right in the heart of the city. It is not to be missed.

2. Adding three new provinces to my list of places I’ve been 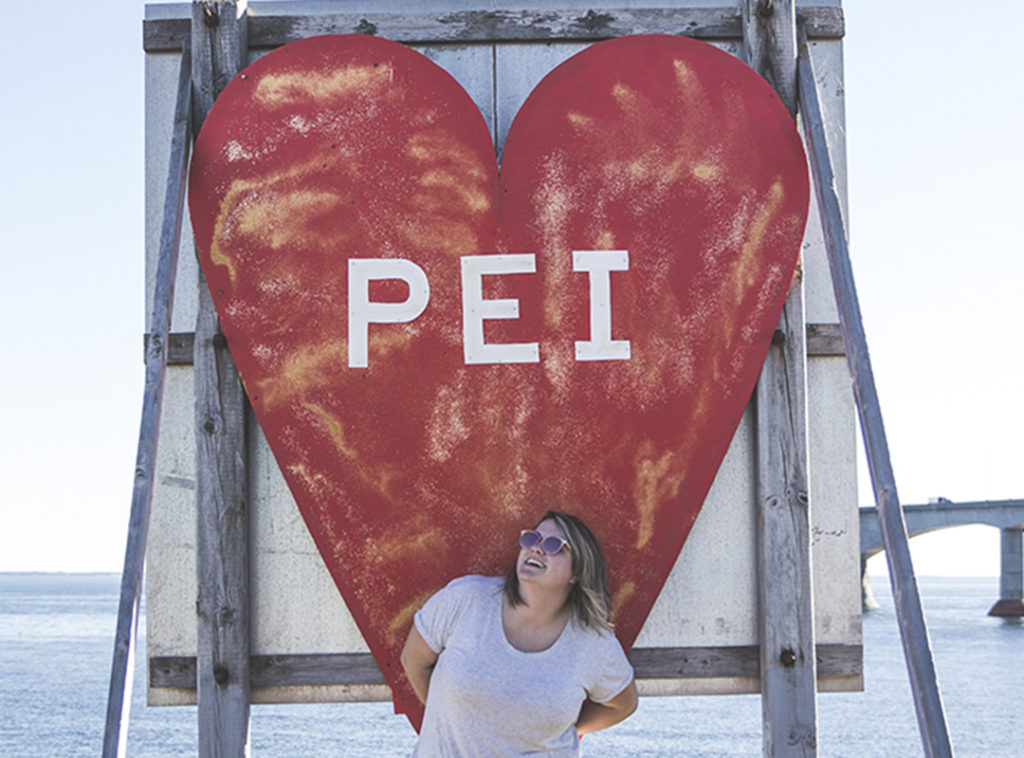 Canada was a huge part of my travel experience in 2017. My dad has been to every province and territory in Canada. (He was in the military, so most of his trips were training operations, but still.) We both love the landscape of our country very much. So, just like my father, my goal is to see every province and territory in Canada. Before this year I had been to British Columbia, Alberta, Saskatchewan, Manitoba, Ontario and Quebec. However, I had not seen any of Canada’s three coasts. This year, sticking with my Canada 150 theme, I decided to hit to road and explore the eastern provinces. Oh man, what a trip. I saw three new provinces – New Brunswick, Prince Edward Island and Nova Scotia – I stopped in four National Parks and explored three UNESCO world heritage sites.

1. Exploring Iceland by campervan and everything else Iceland 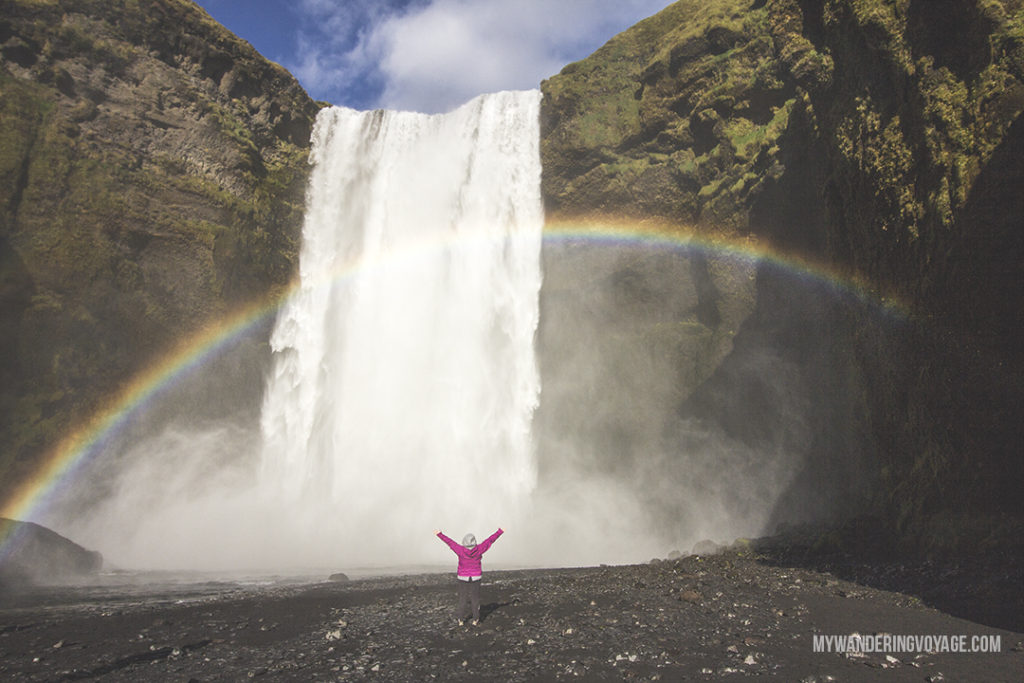 The best travel experience I had was exploring Iceland by campervan. Iceland, the magical northern island that has captured the hearts of many travellers who set food on its black soil. Hands down, Iceland lives up to all the hype. Sure, it was expensive. Yes, we did it as cheaply as we could without being ridiculous. Yes, we splurged on a few things. And yes, the trip was perfect and I would 100% go again. With 10 days in this magical country, we took it slow, but we hit Snaefellsnes Peninsula, Reykjavik, Blue Lagoon, horseback riding along the beach, Iceland’s southern shore, the olden Circle, snorkelling the Silfra and standing at the base of many of Iceland’s waterfall. Perfection, beauty, and everything I ever dreamed.

2017 offered many great travel experiences. In 2018, I’ll be saving big time for a 10 day trip to Italy. I’m taking my mom and dad, which is so exciting because it will be my mom’s first time in Italy.

Travelling with parents means I’ll have a completely different travel experience. I’m definitely a go-go-go traveller, and my parents are not, so I’ll have to slow it down a bit.

I’m also hoping to hop over to the west coast and explore British Columbia for 10 days. I have been to British Columbia before, but only as far as Radium Springs, I never made it to the West Coast. Now that I’ve seen the east coast, one of my bucket list goals is to see all of Canada’s three coasts – Pacific, Atlantic and Arctic.

In 2018, I’ll be trying to do many weekend getaways. I mean hey, that’s what being a part-time traveller is all about.

I look forward to telling you all about it!

Thank you 2017 for being stellar, here’s to 2018 and many more travel experiences ahead!

What were your best travel experiences in 2017 and what are you looking forward to most in 2018? 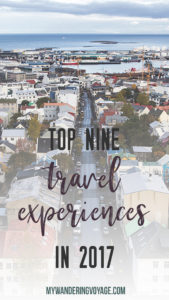 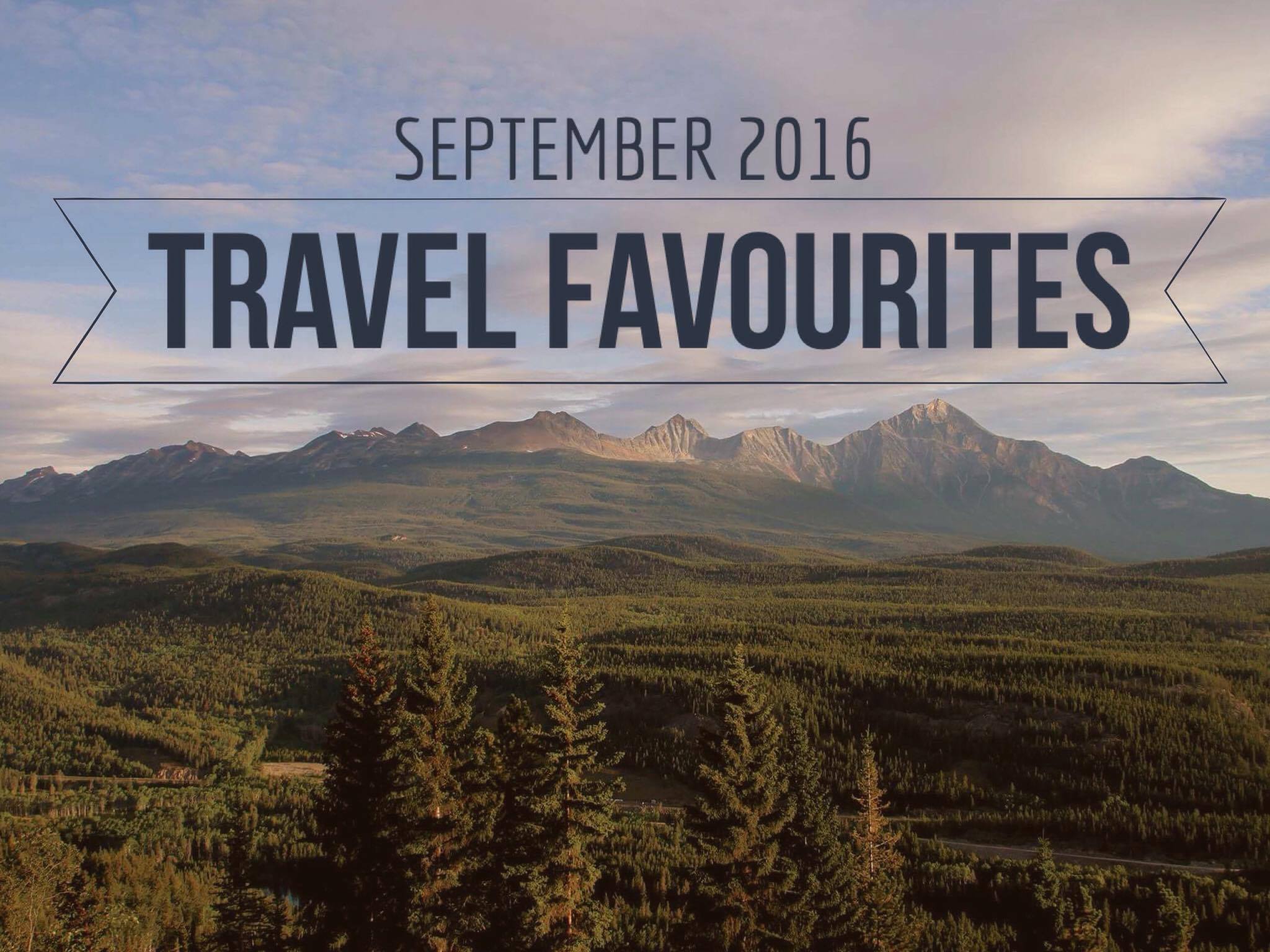 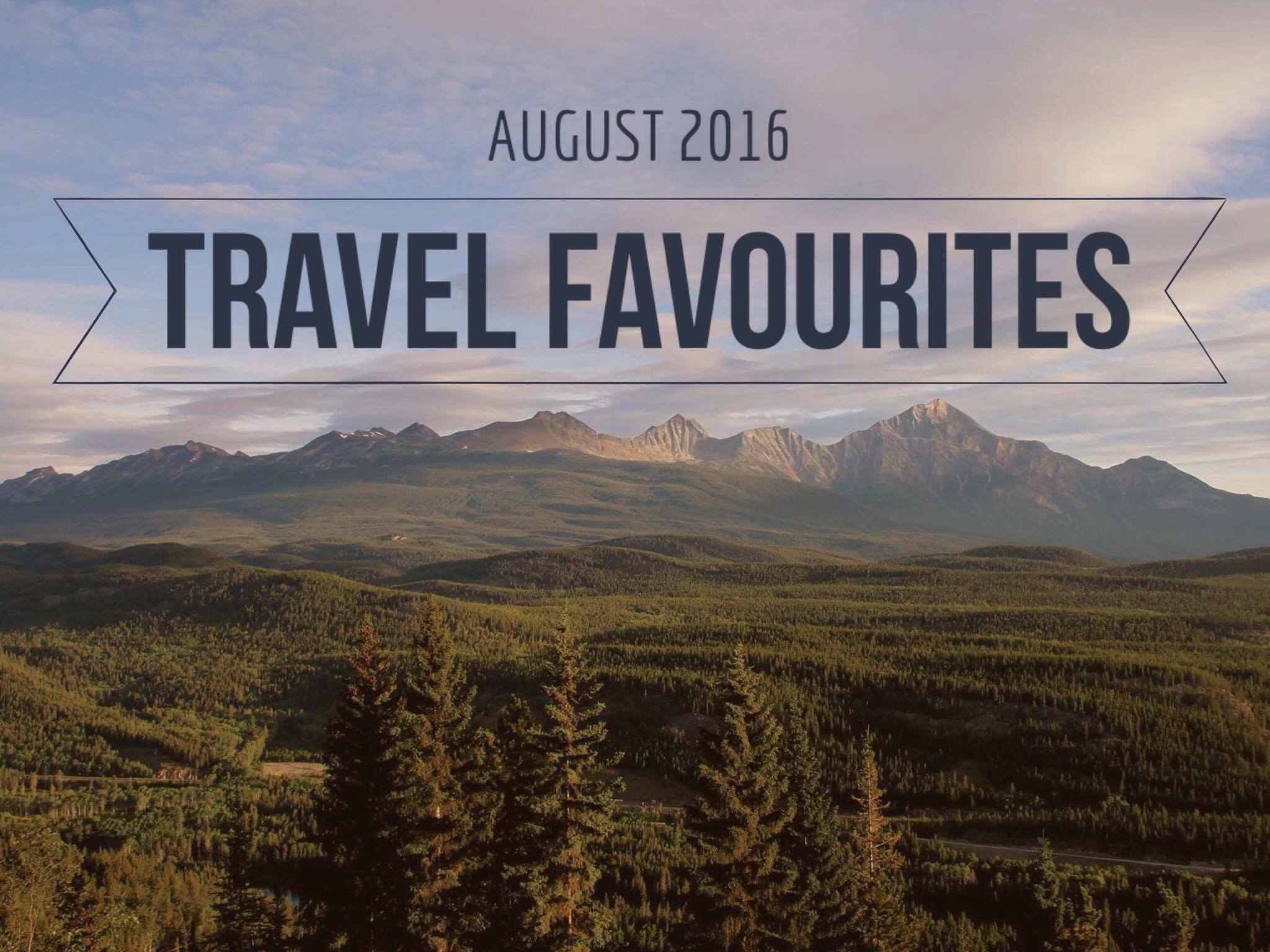 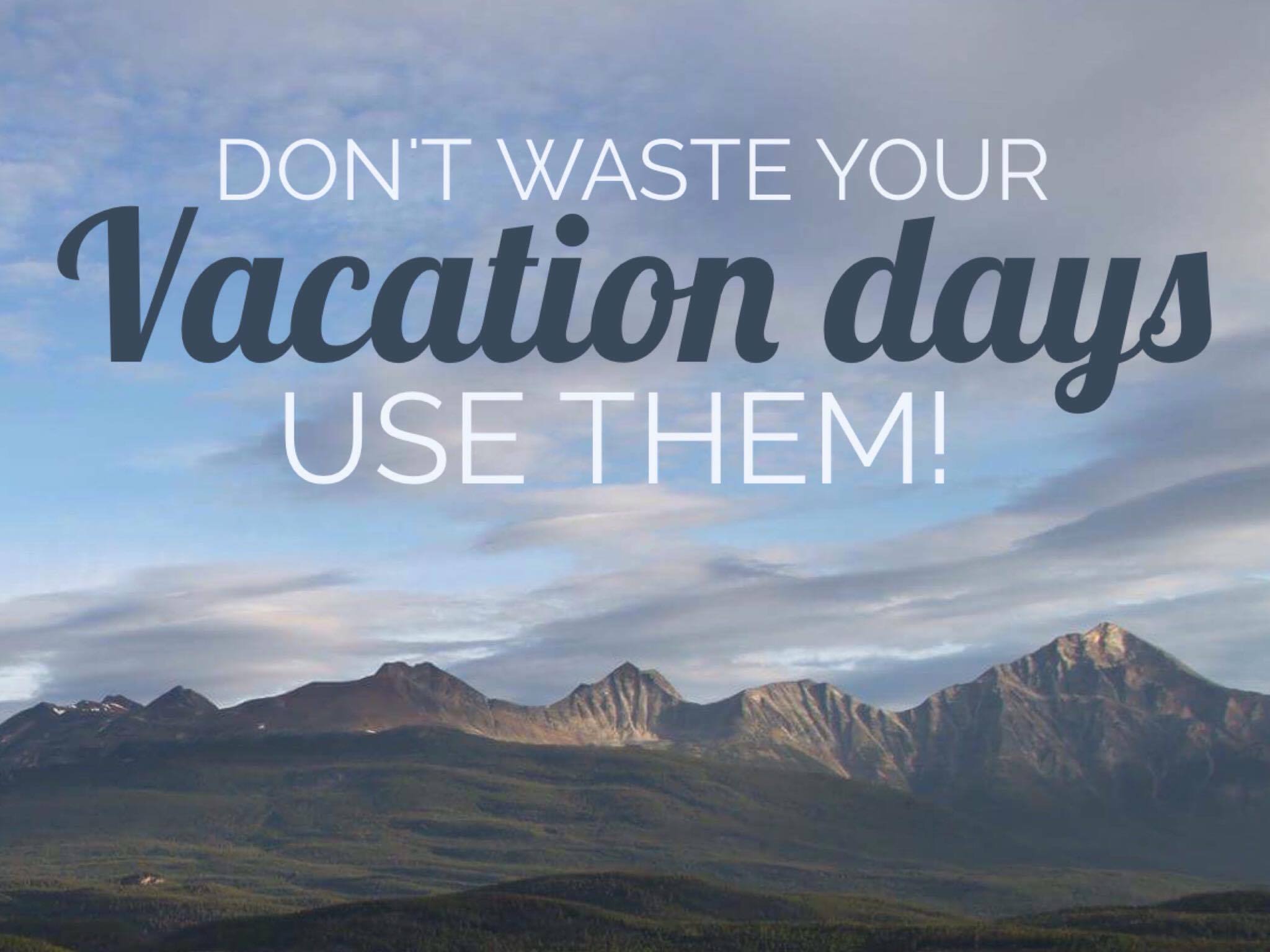 Don’t waste your vacation days, use them